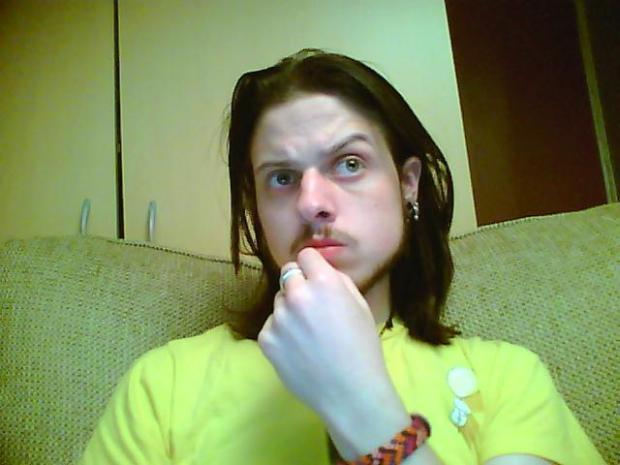 Deep in thought, or trying to decide what to watch? You be the judge.

I got hit twice today for supposedly flirting with customers. I maintain that if they sound cute and start it, have an accent or are playfully sarcastic that I am allowed. For that matter I don’t know why I wouldn’t be allowed to in the first place, that’s just me “personalizing” the call. We’re supposed to do that, its on our monitors, so I’m just doing my job. That’s my story and I’m sticking to it.

Yesterday was a whole different kettle of hateful wench, he reamed me out for 18 minutes about something that was stupid because it was clearly visible, but not clear enough for her which then because of my “tone” became a Sup call which David took and then she bitched at him for a while and I kind of felt bad for all of the customers I had after her simply because I had run out of patience. She was the reason why I didn’t blog yesterday because I knew if I did it would just be a huge long diatribe about how much of a cow she was at one point while David was talking to her and I was listening on my headset she said “what are you going to give me for my problems?” and I immediately responded with “Valium?” to which David almost laughed into the phone, I thought it might have livened up the call just a titch.

Back to today, I started my day off watching Last Comic Standing and thankfully all the comedians I like stayed, and Myq Kaplan sang a song in his pre video and it cracked me up as well as got stuck in my head and is still there now.

RAN OUT OF STEAM! HERE IS SONG FOR LISTENING!

2 thoughts on “Did he just go crazy and fall asleep?”