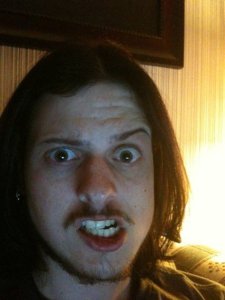 Being confined to the house and all, can’t really be out and about in a town of 7000 when you call in sick to a job that employs a good third of them, I opted to play Red Dead Redemption and bomb around the wild west on a horse rather than sit and watch regular tv programming just to have my brain slowly ooze out my left ear. Keeping myself somewhat medicated with mug upon mug of hot water and honey, I must say it works fairly well, I’m not yelling and screaming and vocally carefree but its a step in the right direction.

Lately I’ve been on this Criminal Minds kick, going back through and watching the series from the beginning and I have to say, its FAR more interesting than CSI plus it doesn’t have a douche with shades busting out bad lines and walking out of frame. Can’t stand that guy, or that offshoot of the show. I watched the entire first season of it because Lucas from Empire Records was one of their agents, but he was a casualty of “we’re killing off one of our agents in our premiere, we all know you want Horatio dead, but instead we’ll kill of the dude Tony likes”. Now some may say, “I really don’t think they put as much thought into it as to figure out who you liked and then kill them” and to that all I can say is, prove me wrong. I’m not trying to be cocky or say that the majority of shows are garnered to suit me, because if that were the case…

Firefly would still be on the air.