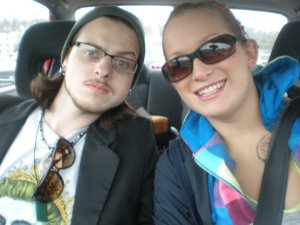 Getting woken up by the alarm on your phone is one thing, getting woken up by a phone CALL is altogether different. Especially when that call is for someone who’s at work, and is NEVER home at that point in the day. Then its just a tiny bit annoying. The upside to getting woken up 3 times by the phone is you decide you don’t want to go back to bed at an earlier moment in the day than usual. When I went to check the mail the first time around I found my order from Amazon, yay, and when I checked it again later, Amazon orders come different from regular mail, I got a replacement shirt from Threadless and my Entertainment Weekly, so all in all it was a productive trip to the mailbox.

I got caught up on Persons Unknown, I was two episodes behind, and watched the two new episodes of Futurama, followed by a trip downstairs to frig around on a horse in the wild west for a few hours. Took a break from that in the evening and watched The Imaginarium Of Dr. Parnassus and I must say I quite enjoyed it. Many people have said it was sub par and did nothing for them, which if you are not a Terry Gilliam fan, I can totally understand. But I am, so I enjoyed it immensely. It was a good movie for Heath Ledger to go out on and instead of the typical “A Film by Terry Gilliam” at the end it read “A Film by Heath Ledger and His Friends” which I thought was a nice touch.

Tonight also gave me the opportunity to talk to Morgan for a little bit which was nice because our very different work schedule’s don’t really give us the time to hang out that we used to. Texting bridged the gap this eve and we’re trying to find time we both have off to actually hang out for an evening and watch a movie. Last time we did that we watched 500 Days of Summer and that was when it first came out.

The Greatest Expression Of Rebellion Is Joy