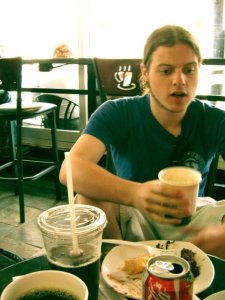 Today at work I felt like a blind rat trying to escape from a one eyed cat with no depth perception, I survived, but its not an experience I look back on fondly. I got to work to be informed that Evolve, our main system, was currently down and we could only do basic inquiries and that was to be done on the old system, the system I wasn’t fully trained on for such things. So we did that from 3 till 5, telling customers to call back in a few hours and hopefully it would be up and running then. Well it was, but the downside being that I was still there when it came back up so we had a crapload of calls coming in and were in queue for pretty much the rest of my shift. I got off at 11 and at around 10:15 we got out of queue. Now I’m at home relaxing, eating some crunchy corn (organic corn pops) and about to watch the premiere of Leverage yet again, because yes folk, it IS that good.

“In three words I can sum up everything I’ve learned about life. It goes on.”

2 thoughts on “I’ll tell you what’s going on. Parker just stabbed her guy with a fork.”